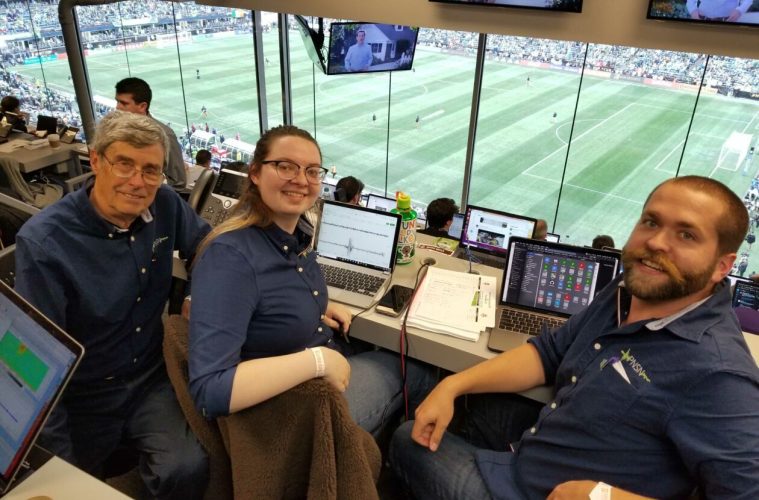 Can Seattle Sounders fans match the Seahawks’ “Beast Quakes” when it comes to making the earth move? Seismologists from the University of Washington and the Pacific Northwest Seismic Network conducted their first experiment to address that question.

Based on today’s results from the Sounders’ MLS Cup championship match against Toronto at CenturyLink Field, soccer fans are definitely holding their own.

Those signals were most obvious when Sounders fans started jumping together. “At first I thought it was a train going by, but it was very much lined up with when the fans were jumping,” seismologist Steve Malone, an emeritus research professor at UW, wrote in a PNSN blog posting.

And that was with a scoreless first half. The needle moved even more wildly when the Sounders scored two quick goals in the second half.

“Both goals — particularly the second one — really, really showed up well. Very strongly, all the way from here to our station located several hundred yards away,” Malone told GeekWire. “The second goal seemed to be louder … and lasted longer.”

The tremor that accompanied Seattle’s third goal was almost as strong.

Today’s experiment was aimed at providing training in rapid instrument installation and urban seismology for PNSN’s researchers, who play a leading role in monitoring seismic events in the Pacific Northwest. Those skills will be crucial for documenting significant earthquakes in the region — like the magnitude-6.8 Nisqually earthquake of 2001, or the magnitude-9 “Really Big One” that experts expect to see someday.

With the Sounders’ permission, the research team hooked up one seismometer inside the stadium for today’s big game, and another one not far outside.

“Fans simply yelling will be of no interest to us; however, their jumping up and down should generate vibrations in the stadium and even be transmitted through the ground to sites at some distance,” Malone said. “The Sounder FC fans are particularly well known for their synchronized rhythmic jumping together, which should generate very strong seismic signals.”

The seismologists’ clearest win was that they were able to hook up their equipment and get the results online for the match. The results were posted in real time on PNSN’s QuickShake website. (The KDK station registered the readings outside the stadium, while the SFC station was inside.) The biggest spikes came at 13:33:53, 13:42:50 and 13:57:07, when the Sounders scored.

“It has been challenging to try and keep up with what the fans were doing in the excitement of the game,” Malone wrote in the game’s final blog update. “It will take some additional analysis to understand all the different types of signals that we recorded and how strong due to what actions.”

Oh, and by the way, the seismologists weren’t the only winners today: The Sounders triumphed over Toronto, 3-1.

This was originally posted on geekwire.com by Alan Boyle. And on GettheWReport.com